IN OUR HANDS: THE BATTLE FOR JERUSALEM
This extraordinary film was seen by hundreds of thousands in sold-out theatres across America. Shot entirely on location in Israel, In Our Hands tells the story of the battle for Jerusalem through the eyes of Israel’s 55th Paratrooper Brigade. This docudrama combines dramatic reenactments with archival footage, interviews with veterans of the Six-Day War, and commentary from former Israeli Ambassador to the United States Michael Oren, the author of Six Days of War.

Witness the most important prophetic event of our time as you watch Israel’s 55th Paratrooper Brigade reunite the ancient city of Jerusalem.

GET YOUR DVD & ACCESS TO 4K STREAMING For A Donation Of Any Dollar Amount! 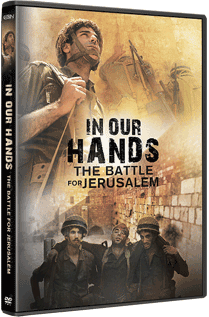 GET YOUR DVD & ACCESS TO 4K STREAMING
For A Donation Of Any Dollar Amount!

Your support makes it possible for CBN Films to continue to produce extraordinary films that reveal, inspire and uplift—and that illuminate amazing biblical truths.

*OPEN FOR CANADIAN RESIDENTS ONLY*